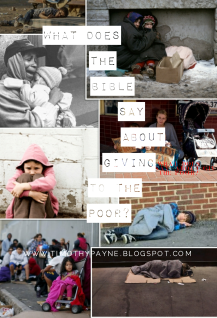 They are just lazy and should get a job.

They should have made better decisions in life. Why did they allow themselves to get in this shape?

They should stop smoking and drinking.

They are just going to waste the money I give them.

I am not here to debate on what we have said is true or false. The point of this post is to hear what the Word of God says about Giving to the Poor!
Proverbs 21:13 NKJV Whoever shuts his ears to the cry of the poor Will also cry himself and not be heard.

Proverbs 19:17 NKJV He who has pity on the poor lends to the Lord , And He will pay back what he has given.

Proverbs 28:27 NKJV He who gives to the poor will not lack, But he who hides his eyes will have many curses.

Proverbs 22:2 NKJV The rich and the poor have this in common, The Lord is the maker of them all.

Proverbs 14:21 NKJV He who despises his neighbor sins; But he who has mercy on the poor, happy is he.

Proverbs 22:9 NKJV He who has a generous eye will be blessed, For he gives of his bread to the poor.

Proverbs 29:7 NKJV The righteous considers the cause of the poor, But the wicked does not understand such knowledge.

Proverbs 14:31 NKJV He who oppresses the poor reproaches his Maker, But he who honors Him has mercy on the needy.

Galatians 2:10 NKJV They (the apostles) desired only that we should remember the poor, the very thing which I also was eager to do.

Psalms 12:5 NKJV “For the oppression of the poor, for the sighing of the needy, Now I will arise,” says the Lord ; “I will set him in the safety for which he yearns.”

Psalms 82:3 NKJV Defend the poor and fatherless; Do justice to the afflicted and needy.

Ezekiel 16:49 NKJV Look, this was the iniquity of your sister Sodom: She and her daughter had pride, fullness of food, and abundance of idleness; neither did she strengthen the hand of the poor and needy.

I John 3:17 NKJV But whoever has this world’s goods, and sees his brother in need, and shuts up his heart from him, how does the love of God abide in him?

Matthew 5:42 NKJV Give to him who asks you, and from him who wants to borrow from you do not turn away.

Isaiah 58:10-11 NKJV If you extend your soul to the hungry And satisfy the afflicted soul, Then your light shall dawn in the darkness, And your darkness shall be as the noonday. The Lord will guide you continually, And satisfy your soul in drought, And strengthen your bones; You shall be like a watered garden, And like a spring of water, whose waters do not fail.

Luke 3:11 NKJV He answered and said to them, “He who has two tunics, let him give to him who has none; and he who has food, let him do likewise.”

Luke 10:30-37 NKJV Then Jesus answered and said: “A certain man went down from Jerusalem to Jericho, and fell among thieves, who stripped him of his clothing, wounded him, and departed, leaving him half dead. Now by chance a certain priest came down that road. And when he saw him, he passed by on the other side. Likewise a Levite, when he arrived at the place, came and looked, and passed by on the other side. But a certain Samaritan, as he journeyed, came where he was. And when he saw him, he had compassion. So he went to him and bandaged his wounds, pouring on oil and wine; and he set him on his own animal, brought him to an inn, and took care of him. On the next day, when he departed, he took out two denarii, gave them to the innkeeper, and said to him, ‘Take care of him; and whatever more you spend, when I come again, I will repay you.’ So which of these three do you think was neighbor to him who fell among the thieves?” And he said, “He who showed mercy on him.” Then Jesus said to him, “Go and do likewise.”

Matthew 19:21 NKJV Jesus said to him, “If you want to be perfect, go, sell what you have and give to the poor, and you will have treasure in heaven; and come, follow Me.”

James 1:27 NKJV Pure and undefiled religion before God and the Father is this: to visit orphans and widows in their trouble, and to keep oneself unspotted from the world.

Deuteronomy 15:7-11 NKJV “If there is among you a poor man of your brethren, within any of the gates in your land which the Lord your God is giving you, you shall not harden your heart nor shut your hand from your poor brother, but you shall open your hand wide to him and willingly lend him sufficient for his need, whatever he needs. Beware lest there be a wicked thought in your heart, saying, ‘The seventh year, the year of release, is at hand,’ and your eye be evil against your poor brother and you give him nothing, and he cry out to the Lord against you, and it become sin among you. You shall surely give to him, and your heart should not be grieved when you give to him, because for this thing the Lord your God will bless you in all your works and in all to which you put your hand. For the poor will never cease from the land; therefore I command you, saying, ‘You shall open your hand wide to your brother, to your poor and your needy, in your land.’

We are blessed to be a blessing.
Some of us may need to examine what we have said in the past about the giving to the poor and obey what the Bible says.
I would love to hear what you and/ or your church is doing to give to the poor in your community? Comment below.