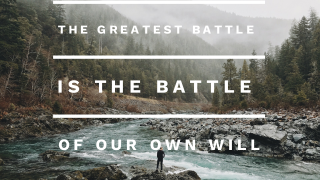 I believe the greatest battle we face as believers of Jesus Christ is the battle of our own will. I want to encourage you today don’t get discouraged that it seems you continually have to face this battle. Surrendering your will to God is not just a one time decision it is a faithful lifelong pursuit.

Therefore, when He came into the world, He said: “Sacrifice and offering You did not desire, But a body You have prepared for Me. In burnt offerings and sacrifices for sin You had no pleasure. Then I said, ‘Behold, I have come— In the volume of the book it is written of Me— To do Your will, O God.’ ”
Hebrews 10:5‭-‬7 NKJV

Jesus saying, “Father, if it is Your will, take this cup away from Me; nevertheless not My will, but Yours, be done.”
Luke 22:42 NKJV

The key to victory in the battle of our own will is humility. In humility we must follow the example of Christ, and have the mind of Christ.

Let this mind be in you which was also in Christ Jesus, who, being in the form of God, did not consider it robbery to be equal with God, but made Himself of no reputation, taking the form of a bondservant, and  coming in the likeness of men. And being found in appearance as a man, He humbled Himself and became obedient to the  point  of death, even the death of the cross. Therefore God also has highly exalted Him and given Him the name which is above every name, that at the name of Jesus every knee should bow, of those in heaven, and of those on earth, and of those under the earth, and that every tongue should confess that Jesus Christ is Lord, to the glory of God the Father.
Philippians 2:5‭-‬11 NKJV